This was a pair of modules that I purchased which could be used in a simple wireless system, the module comes in at under $4 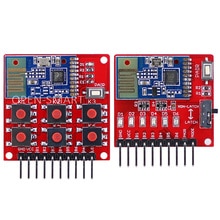 The kit includes one pair of transmitter and receiver modules. And the frequency is 2.4GHz. There is the MCU on board with built-in encoding and decoding code, pairing code.

When you do the remote control operation for the first time, you need to pair the transmitter and receiver, and you do not need to do it again in the future.

About Wireless Switch TX (will be abbreviated as TX module below):

About Wireless Switch RX (will be abbreviated as RX module below):

Step1: Power up for the two modules. Press and release the PAIR button of RX module, then D6 LED is on (tells it enters the pairing state). Press and release the PAIR button of TX module within 10 seconds, then the D6 LED flashes for a while and keep the light on. It is also possible to pairing this RX module with more TX modules (up to a total of 20).

Step2: Wait until D6 LED is off. You can press the K1~K6 button of TX module to test. You can push the toggle switch on RX module to learn the difference between LATCH and NON-LATCH output mode.

Got sent this video which demo’s the pairing process

Using your Alexa – Calendars, timers, alarms and the do not disturb feature

Over 100 fun things that you can ask Google Assistant

10 sensors and modules for microcontroller development that...